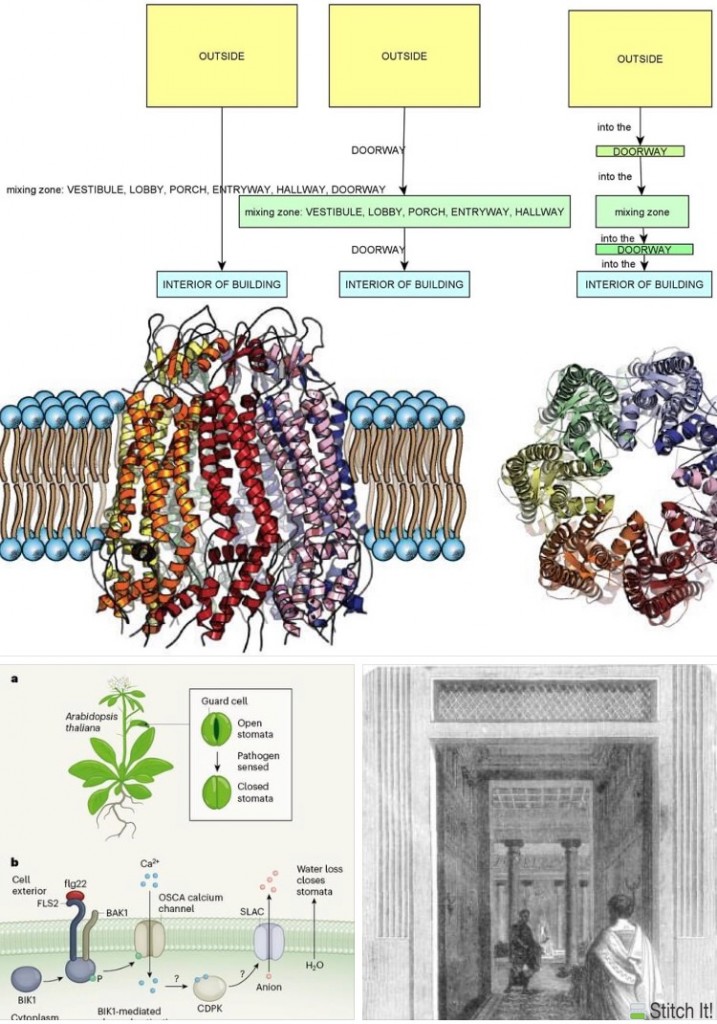 what makes “box and arrows” (node and edge) diagrams work for humans? i knew the link (line/edge) was key (to unlock door but what is the door cognitively?) to understanding?

Doorway Effect (forgetting once you go through a room’s threshold/doorway — memories stick to the room they arrive in) is not only psychology but also proven with vivid brain scans that show the actual abstract doorway shape in the scans correlating with forgetting, was related i suspected.

zooming in closer and closer to the process, i discovered a vestibule is functionally a long doorway / a hallway, a mixing of two spaces. it is often used for that function, such as airlocks where outer space and air both mix even for a moment, or a covered porch next to a house cooling the air prior to entry.

doors themselves can be sharp and crisp once open or closed so they have a possible binary function.

this makes them a good analogy for switches but in switches the edges/lines/doorways are energized and the view is sideways from what i’m doing (closed doors allows current to flow) so best to put that image aside for a bit (because open doors allow air to flow). (structure vs flow really but that’s for another time)

Back to open door = mixing air: despite the sharp and crisp FUNCTION of doors, as you zoom in, there is always a period of time where it is not fully open and not fully closed: too closed for some purposes, too open for other purposes.

so a model of 3 will do: outside, mixing zone (vestibules), inside.

i looked for biological vestibules and found many.

all the way back to embryotic. not only of humans but lower and lower life forms.

Life is sets of complicated, coordinated movements of many features so this form
and this process quite literally is functionally coming out of our DNA, likely down to virii if i looked.

outside, mixing zone, inside.

i could cross into regular chemistry at this point of course. From there i could go to physics even.

But that life utilizes these forms and processes – even when configured with millions of coordinated subprocesses that themselves do not resemble the product whose local fitness levels might be better served elsewhere but are instead are coordinating into these behemoth tasks – or constrained by the community to do so – constructed of organic materials in configurations that utilize kinesthetics, electricity, polarity, hydraulics, pressure gradients, surface tension, memory functions (spun glass, hysteresis, elasticity, and whatever DNA constructs it to do / be when repaired) — that we use these same things in our architecture and in our tools for understanding …

what’s a basic abstracting device goes quite deep in life, tiny, back in time and also legion — our bodies are teeming with this “abstract” process happening millions of times at nearly inconceivable tiny scales. All alive.

maybe it’s merely physical. sloshing a fluid near a floppy solid and it becomes a pressure equalizer or a door, depending on structural integrity.

but that life uses conserved stereotyped patterns that are convoluted and complicated and quite often indirect makes their rue goldberg style of functioning a truly amazing thing.

maybe this form and set of functions is useful at all scales.

so from a top down view, the larger scale chains together the lower scales to perform a useful set of functions in similar forms.

regardless, it is certainly fundamental. it is so obvious as to be overlooked.

it is communication. to communicate. to commune. to dine together. to eat similar foods as each other at a common table. Finding what’s in common.

how does hot outside air mix with cold inside air? convection currents.

how does public mix with police in a police station vestibule? through a security guard as a door. communication protocol is to have a purpose for being there that is on the list of acceptable reasons to be there.
explaining yourself / showing papers / being looked up in a database is the mixing / confusion / uncertainty space. 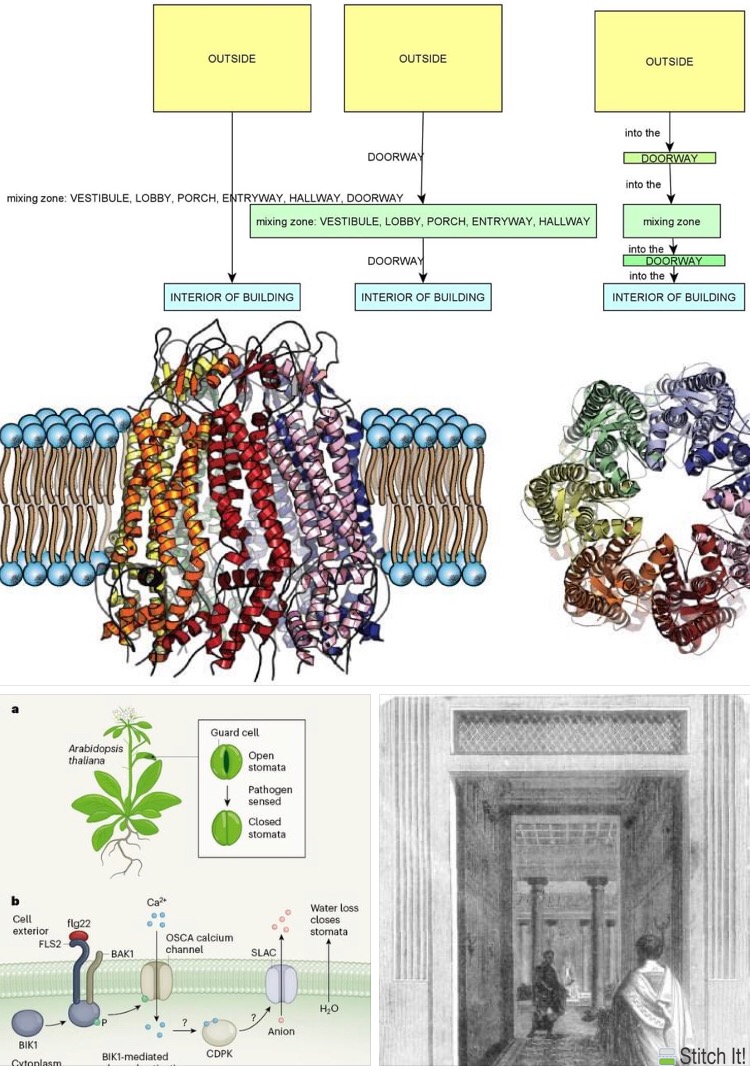