Posted on January 17, 2021 by Kenneth Udut Leave a comment 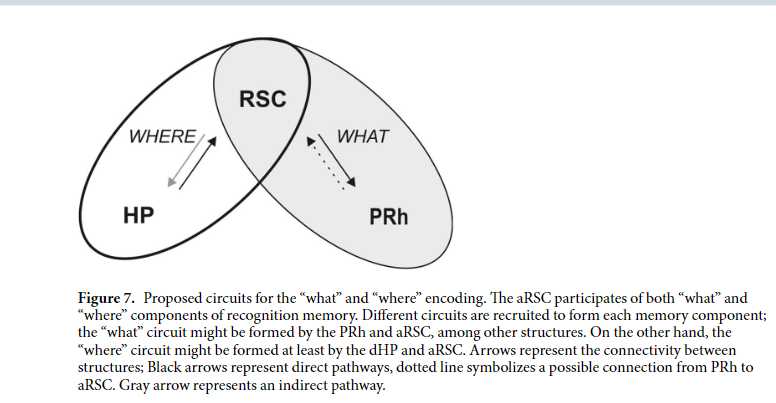 Two Retrosplenial Cortex finds meaningful to me:
a) It is a junction area between auditory and visual systems or at least it processes auditory scene *and* visual scene information similarly (with a chance of cross connect (hypothesis, synesthesia)
b) RSC does NOT output “WHERE” information. It receives and processes it for INTERNAL use but it _does_ output “WHAT”. _Anterior retrosplenial cortex is required for long-term object recognition memory_ AND image.
c) RSC is “overconnected” in autistic people and possibly others which shows up as being internalized (inward feedback focused / self-feedback) with a “lack of insight” (outward feedback focused / social feedback)
As I am deaf in my LEFT ear and blind in the RIGHT eye, the part that processes scene information (first person familiar experience) is important and finding them both in the same area is exciting for me as it opens up possibilities for self-understanding
a) first:
Structural and functional brain network of human retrosplenial cortex
Fiber networks of BA29 and BA30 were constructed in humans by DTI tractography.
•
Functional connectivity network of BA29 and BA30 were constructed in humans.
•
The auditory cortex – RSC pathways were found in the network of BA29.
•
The visual cortex – RSC pathways were found in the network of BA30.
Abstract
Retrosplenial cortex (RSC) plays a key role in various cognitive functions. The fiber connectivity of RSC had been reported in rodent and primate studies by tracer injection methods To explore structural and functional connectivity of two sub-regions of RSC, Brodmann area (BA)29 and BA30, we constructed fiber connectivity networks of two sub-regions by diffusion tensor imaging (DTI) tractography based on diffusion magnetic resonance imaging (MRI) and functional connectivity networks by resting-state functional MRI. The BA29 network showed fiber connections with auditory cortex and functional connections with BA21. Both fiber and functional connections show that BA30 network includes visual cortex. Furthermore, BA30 had fiber connections with hippocampus, thalamus, and prefrontal cortex. We suggest that (1) structural connectivity reflects functional connectivity in some degree. (2) BA29 mainly received and processed sound information from auditory cortex, while BA30 mainly received and processed scene information from visual cortex.
https://www.sciencedirect.com/science/article/abs/pii/S030439401830185X