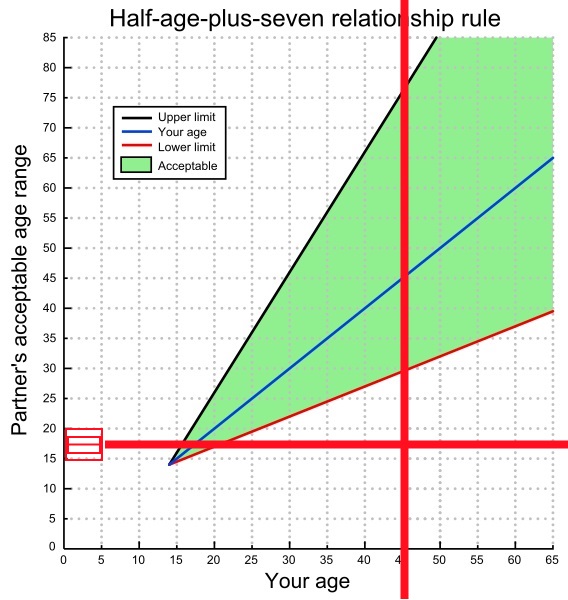 The “Half your age plus 7 rule” is a guideline for “general social acceptability”. It’s tame, safe, and anybody who criticizes age differences in relationships within the green range is ridiculous
It happens but it’s usually teasing or mean-spiritedness.
Now, I’ve calculated your coordinates. I had to figure out how to divide a box into 5 parts which was a fun little challenge. I realized that two rectangles inside each other with a line in the middle, paying attention to the spaces being even would get me here.
So, what this chart says to me is: You’ll get flak from some people.
=====
In 1986, at 14, I found the THICK book at my public library, “Sexual Behavior in the Human Male” (1948, Kinsey). It was full of charts and tables, short little stories about various aspects of male sexual behavior.
I studied it, fascinated at the world of possibilities that was open to me.
I wanted to try it all.
By 24, my science experiment was finished and I was geared up to enter a monastery (and I did for a little bit at 27).
At the age in 17 in 1989, I got a modem and online. Next thing I know, I had a 52 year old boyfriend in Massachusetts, a 14 yr boyfriend in South Carolina who was already in a relationship with a 27 year old in Indiana, and a local girlfriend who was 20 that I met on CB radio and we went bowling a lot and she had a car.
Got a new girlfriend at college at 18 – several in a row, some simultaneously, while continuing my dual online trysts, which involved a lot of Greyhound trips, long car rides. The 52 yr old’s mom crocheted me a blanket which I still have to this day and the South Carolina’s mom thanked me for helping keep her son in school while accelerating him to early admission at 16 at a college.
By the time I was 20 in 1992, I was back home from college and those two relationships were done and I’d had several other relationships, including one with a pair of Otherkin (Elvenkind to be precise) which was interesting for its own reasons. Looked like identical twins with long blond hair and looked like human male and female but no, they were Elvenkind.
So, I don’t judge. But I’m aware that even people that don’t judge, judge, just differently.
======
In gay culture, it’s called “chicken”. Straight culture it’s called “jail bait”. Both can be called “creeps” or “creepers”, gay culture says “chicken hawks” and I’m sure there’s s similar name in straight culture for that. Among women to men it’s “Cougars”.to “Cubs”.That’s as far as my knowledge goes.It’s usually cheered when it’s on the same side of the Adult line and jeered when it’s not.Society’s an odd and fascinating place.
=====
Seeds can only flourish in nutrient rich sol, so for me from a cop POV, my willingness probably stems from EARLIER random encounters with cougars and chicken hawks from CB radio or moms of school friends.As far as Jim’s interest in me, I’d say he was what they call an “ephebophile”, although some argue that it’s an invalid category for various complicated —excuses— reasons.
=====
Creepy moms trying to sack me as a young teenager was harder to deal with. Had to evade in closed quarters.Short lived scout leader was easier: “You’re the Scout master, what do you think you’re doing?” and that stopped it and life went on.Motive/psychology? Good question.Oddest encounter was a really big guy with a colostomy bag on CB radio that lived a few towns away.He had a van full of stuff, opened and closed his van door with his cane, his house looked and smelled like shit.On the shelf of his bedroom was a row of books on child and adolescent psychology, sexual deviance, etc.No question that laws were broken that Saturday afternoon.He was a made-for-TV deviant, would have made a fantastic meme.What’s his motivation? My synopsis? Sad man looking to get sex any way he can and figured out that “I got no boundaries” teenagers were easier than dealing with more complicated adult relationships.
======
I can’t say that generalizes to all cases but it did for
Bob “GearJammer” Brown. Was a nice guy though, although that’s part of the nerd player swag bit.
====
Oh there’s the house. Probably 30+ yrs ago. Only there once but I had a policy of keeping all phone #’s and addresses as a kid and I still have my 29 yr old text file on my laptop

and no  I wasn’t saying Bob Gearjammer was like you or me like your friend — it’s just an experience I had among many and I didn’t have a problem with it. It’s all context dependent and that was a world and a lifetime ago.
——-
So:1986-1989
I was 14-17.
He was 32-35.So, that’s as close as I can trace it. Only reason this stuck out is that Gearjammer was a “classic’ “don’t talk to strangers” sample but it didn’t phase me then or now. Just part of the fascinating minefield of growing up and an adventurous spirit can take you to fascinating places.
=====
Consider it from this frame:Coddled kids mature more slowly than kids who grow up in harsh environments.
====
It’s not just individual though. You REALLY have to look at the testing samples here.A group of kids from upper class suburbs vs Egyptian kids who start working at 10. Will they have same PFC development?
=====
There have. Usually criminal offenses is used as proxy for “poor inhibition”.
=====
biologically, the pump that starts puberty is pretty universal.It’s around 3rd grade, age 8, for almost everybody.How things go beyond that is a lot of variation.
======
Only at the start. Look at start of viiable puberty and length of puberty:Range of visible START is from like 8-16 – and that’s a NORMAL range. HUGE variation.Anything beyond is a medical problem.So, what affects start of “showing”?
What affects how slowly or quickly it progresses?Nutrition, social factors, emotional levels, trauma, daily routines, culture, you name it.And of course whatever the clock is that your genes prefer you release at but that’s amazingly variable and extremely sensitive to basic stuff like food or sickness.
======
For such a variation in start time and length, to THEN declare, “And it’s all done at 25″. It’s sort of ridiculous to generalize. Did the slow maturing speed up suddenly? Did the fast slow down?Death is only similar “on average”. It’s actually median that’s more interesting, where 1/2 are older and 1/2 are younger. Averaging skews.
======
Cell death varies widely. Cancer is lack of cell death.
====
I do not think there is a “fully formed” PFC. The brain is quite literally plastic. A goo. It physically moves and shifts around your skull through your whole life, staying vaguely in place starting around 25 years old for a few years but starts shifting again before you know it.It seems that most studies of “impulse control” and adolescence are basically talking about gambling/addiction inhibitions.https://psycnet.apa.org/record/2012-14756-001
=====
The old fashioned “brain map” is a bit of a practical lie – and misleading.
====
This brain scan adulthood determination strikes me as “inscriptio corporis” [from article I just linked]
“Originally, puberty was understood in its most literal sense, as sexual matu- rity; until Justinian there was even a checking procedure – the inscriptio corporis – in the case of boys, which was abolished later on for being considered indecent.
Every year, on the day of liberari – 17th March – pater familias gathered with members of consilium domesticum and agreed to declare the young man “puber”.
They took him to the public square, took his toga praetexta off him and imposed the toga virile on him, which meant joining in the political community as citizen.
Form then on, he could participate in elections, access to the court of justice, make business and join in the militia, in other words, he had the same rights and duties as adults.
“
=======
“
8. Final remarks: the ‘teen brain’ debate in perspective
Young people are not passive victims of brains that are out of control. They are active agents in the design of an adulthood that meets their needs and enables them to survive within their environment and make sense of experience (Sercombe and Paus, 2009, p. 35)
“
=======
I met lots of crazy adults as a kid. For all the stories crime shows show and the greater number hiding in police files, school administration records, church and scouts administration records, are an untold multiples of “everyday” stuff.I think a far greater danger is with classmates than adults though, whether in town or online.I don’t think most are life threatening but is it bad behavior? Most definitely.
=====
I don’t think parents should isolate their kids. But learning a bit of street wisdom, coping skills, healthy sense of empowerment and a feeling of self-sufficiency matter.As a kid, I was told, “Say no, and go, and tell someone you trust”.But, what if you don’t trust anybody? So, you learn to avoid bad situations instead and try to gauge as best as possible and always know your exit and way home.
——
Bad Adults still usually have enough knowledge to not want to get in jail. Bad kids that are peers are far more likely to get caught up in the moment with other peers and go way too far.Veil of secrecy is probably about the same in both though.
=====
Catch-22 is: Mandatory reporting _should_ stop things from happening but what it does instead is stops reporting. Trust is key but trust is a balance between letting things be (to continue trust) and knowing when “it’s time to escalate this into a reporting situation”. I don’t know the right answer as I think it’s situational.
======
If I were a teacher or youth worker, I would not be able to work in a mandatory reporting environment. I would be prone to only report when asked or strongly hinted at as it’s their lives they have to lead and authorities can be more traumatic and heavy handed than their situations.
That also means I’d make occasional mistakes and would not be able to deal with that.
——-