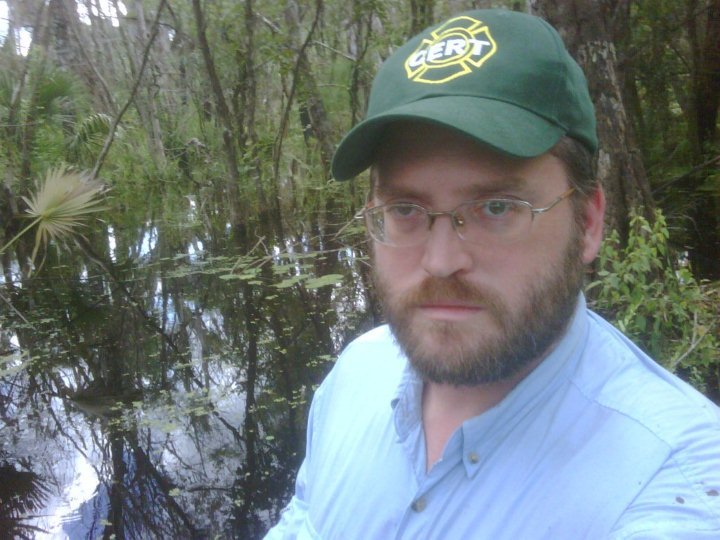 In my yard we get 3 of the 4 poisonous north american snakes. Cottonmouth, Rattlesnake and copperhead. Kill ‘em all you like. Have fun with the skins. Lots of black snakes. (equivalent to up north garter snakes). They have rattlers but they’re not deadly. But they bite and hang on, so that hurts…. or they bite repeatedly.

oh absolutely. We’re no rainforest here. Lots of weird critters but nothing like a rainforest. A florida panther killed my goat a few years ago. I should’ve had a roof to the cage. Had a florida biologist check out what killed him and yup that was it. The deer are tiny here (my brother is a hunter). But yeah, I think you’re better off with the rainforest if you want concentrated.

===
Oh and a rare picture of me in the swamp. I was helping my brother put up his tree stand a couple of years ago. 2 feet of water, water moccasins swimming on top. The boots were at the top of the water so… no protection there. Water kept coming over the top of the boots. Can’t run in the swamp: the mud sucks your boots in.

Well, you can’t live on bottled water I don’t think. Gotta have a source eventually. Get a driller in or something. Get some bleach there. 2 drops per gallon kills everything. (1 drop if the water’s not grossly awful is enough), Put a bit of bleach in the cap of the bottle, then piece of toilet paper in the cap and let the end hang down. The bleach wicks up the toilet paper, down, and then ::: drop ::: – ::: drop :::: – done.

Wait, I dunno how long. 10 minutes I thnk? You don’t taste the bleach and it kills everything bad.

Even without plumbing though, you’d probably have some sort of well necessary, I’d think.