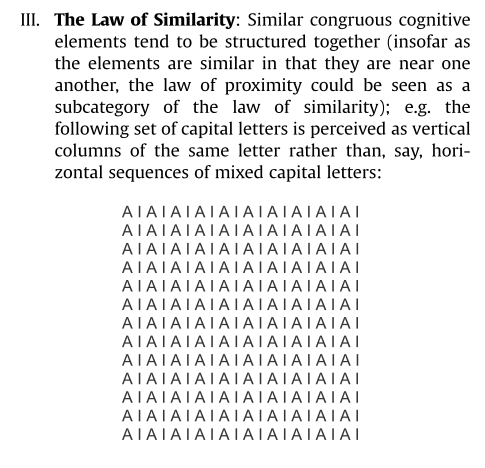 Rhetoric -> Gestalt.
Figure of Speech
Law of Similarity (Follows)
Antimetabole,Commutatio Repetition of words in successive clauses in reverse grammatical order: “we love a deal and deal in love”
Antistasis, Refractio The repetition of a word in a contrary sense, e.g. Benjamin Franklin’s “Your argument is sound, all sound”
Antisthecon, Littera pro littera Substitution of one sound, syllable, or letter for another within a word, e.g. puns
Assonance Repeating similar vowel sounds, preceded and followed by different consonants, in the stressed syllables of adjacent words,
Battologia Overbearing, pointless repetition, e.g. “psychology is the scientific science of the mind by scientific means”
Coenotes Repetition of two different phrases: one at the beginning and the other at the end of successive paragraphs.
Conduplicatio Repetition of words in adjacent phrases or clauses, e.g. “to end this war, we must end her wicked rule”
Consonance The repetition of consonants in words stressed in the same place but whose vowels differ
Diacope Repetition of a word with one or more between, e.g. “Senseless! What a waste! Senseless!”
Diaphora Repetition of a common name so as to perform two logical functions, e.g. “boys will be boys”
Diastole, Ectasis To lengthen a vowel or syllable beyond its typical length, e.g. end couplet “hit him hard, that great bastard!”
Epanalepsis, Resumptio Repetition at the end of a line/phrase/clause of the words occurring at the beginning, e.g. “a lie begets a lie”
Epenthesis, Interpositio The addition of a letter, sound, or syllable to the middle of a word, e.g. “cursorary” in lieu of “cursory”
Epistrophe, Conversio Ending a series of lines, phrases, clauses, or sentences with the same word or words
Epizeuxis, Iteratio Repetition of words with no others between, for vehemence or emphasis, e.g. “faith, faith alone will save us”
Homoioptoton,Similiter cadens The repetition of similar case endings in adjacent words or in words in parallel position
Homoioteleuton,Similiter desinens Similarity of endings of adjacent or parallel words
Mesarchia The repetition of the same word or words at the beginning and middle of successive sentences
Mesodiplosis,Mesophonia Repetition of the same word or words in the middle of successive sentences
Metathesis,Transposicio The transposition of letters within a word, e.g. “theatre” as “theater”
Onomatopoeia, Nominatio Using or inventing a word whose sound imitates that which it names, e.g. “buzzing bees”
Paregmenon The repetition of a word or its cognates in a short sentence, e.g. “Social-democracy dies for the greed of the greedy”
Parelcon The use of redundant or superfluous terms, e.g. “the damaging blow caused much damage to his jaw”
Paroemion Alliteration taken to an extreme where nearly every word in a sentence begins with the same consonant
Paronomasia, Allusio Using words that sound alike but that differ in meaning, e.g. puns
Ploce, Conduplicatio General term for the repetition of a single word for rhetorical emphasis, e.g. “public banks mean wealth for the public”
Polysindeton, Acervatio Employing many conjunctions between clauses, often slowing the … …… …tempo or rhythm, i.e. “and and and and ”
Repetitio Repeating the same word variously throughout a sentence or discourse
Symploce, Circulo rhetorica The combination of anaphora and epistrophe
Systole, Contractio To make short a naturally long vowel, e.g. end couplet “live for the thrill, try this new reel”
Tricolon Three parallel equivalent elements in a concise series, e.g. “taste, trust, force – that’s a gentleman in a nutshell”
From: A classification of classics. Gestalt psychology and the tropes of rhetoric, Giorgio Baruchello