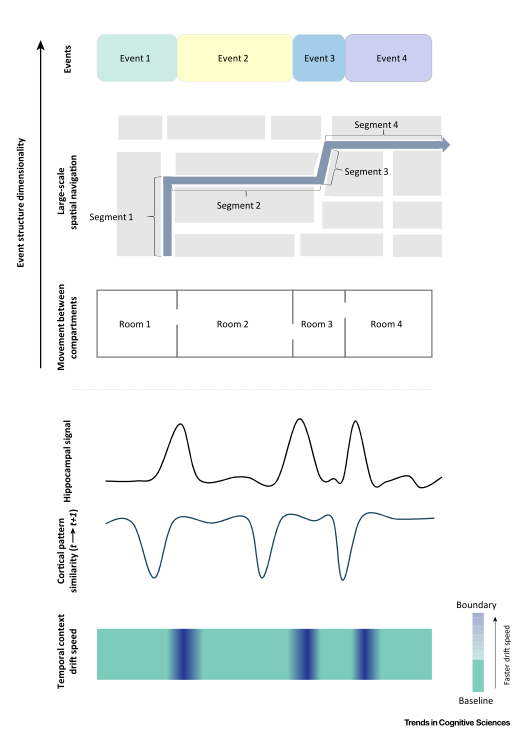 Ok. “Law of excluded middle”? It’s Cognitive. Comes from moving from room to room through doorways, from living in confined spaces.

Looked up “Ancient Greek homes” to confirm. Poor to wealthy, most but the absolute poorest lived in homes with many doorways.

Many doorways = cognitive event boundaries where contexts change and brain remaps. [Why you lose items when you move them to another room].

Possible contrast might be found by comparing storytelling/event recollection among people who live as nomads, out in open areas, collectively, agriculturally. Is time circular? Logic more flexible and intuitive? Do stories freely mix past, present and future, myth and event flowing freely between?

=========
“Figure 1. Shared Features of Spatial and Nonspatial Contextual Boundaries. Boundaries between events may be detected on the basis of spatiotemporal context shifts. During navigation, decision-points act as boundaries between road segments. This segmentation is most obvious when turns are made due to a concurrent shift in visual information. Similarly, movement between compartments elicits the remapping between spatial representations. Evidence from event narratives suggests that boundaries produce a peak in hippocampal activity that is preceded by shifts in cortical activity patterns [5,81]. Computational modeling of episodic memory suggests a transient increase in the speed at which contextual representations change over time (temporal context drift) immediately following a spatial boundary [36], repelling events on a mental timeline. Both these phenomena enable the separation of events in space and time, and may stem from the same underlying neural mechanism which requires updating at the boundary to signal a shift in contextual properties. ”

That’s not the conclusion of this paper. It’s mine. But from macro-to-microcosm, it makes good sense.