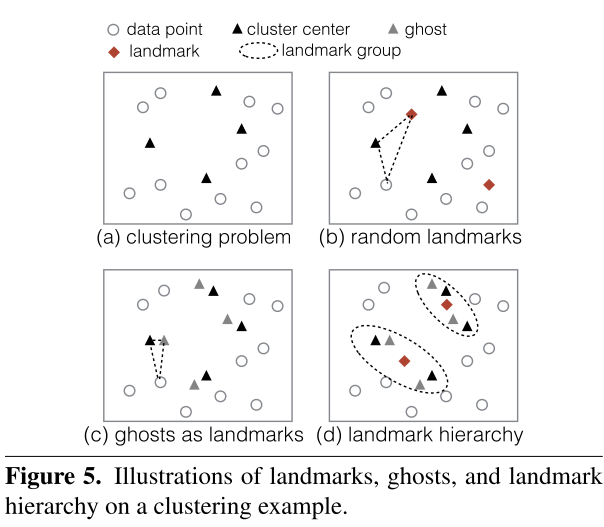 2017: Improving compiler efficiency by thousands of times by implementing triangle inequality logic that uses VECTORS (the angles of the triangle) instead of the SIDES (lengths).

I post things that inspire me. This is related to AI and clustering (or “making categories”) which has always got me thinking.
====

Oooh: “Start from where you are”. Ghost landmark. I Like it.
=====
oh NOOOO – it’s start from where last WERE to figure out where you’re GOING, including where you are.
“Ghosts In many iterative algorithms, the locations of the
points or the values of the vectors in question get incremental
updates across iterations. We call their locations/values in
the previous iteration their ghosts. Because a ghost of a point
is often close to that point, it can often serve as a good
landmark.”
=======
“Property II: Landmark Preference. Unlike ETI, which
prefers landmarks close to either point in the question, ATI
prefers landmarks that form small angles from either of the
vectors in question. It is easy to see, from the deﬁnition of
ATI, that such landmarks give tighter bounds than those with
large angles from both vectors.”
_To get there, go as straight as possible with fewest dramatic turns_ – like Great Circle in flying. Ah!
=====
• Cosine Similarity:
On the other hand, for cosine similarity, the group bounds
from ATI depend only on the largest angle from the target
vectors to the landmark (e.g., max(θ ~
L,~t
)), which stays
the same across different query points. But the group
bounds from ETI depend on multiple factors
======
OHOHOHOH… because NARROW ANGLES is equivalent to a NARROW LIGHT CONE.
In a narrow light cone, you can find what you want more quickly than if you had a WIDE light cone!!
Ha ha — PHYSICS…
======