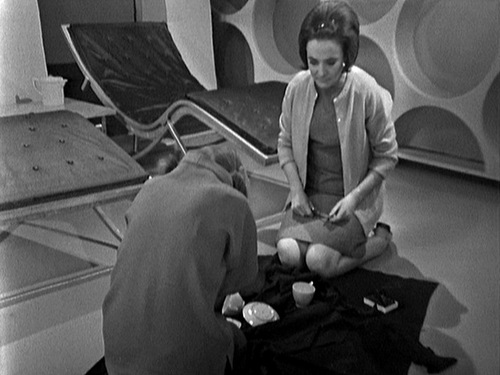 Never officially a Whovian of the era but I was closeted in that regard. I’d be proud of not putting on costume, feeling superior in some way. At the same time, every other aspect of who I was then and am really rather like that.

I loved all the Doctors because they’re the same person. I poke fun sometimes, but it’s the Doctor character that I adore. Showed 8 yr old me that change is normal, that normal is weird etc etc and I could give a list of 100 life lessons learned so far from the character. Loved all of them and this will be no exception. There’s always a breaking in period though, and I think Colin Baker was the hardest for me because he was my first real change. (but I was 12 and 12 yr olds are 12 yr olds bout stuff)

I loved Jon Pertwee. Peter Davidson is my first but I was lucky in the USA my public broadcasting station would run old episodes every midnight Saturday night and sometimes do big weekend marathons. I’d be glued to the TV. No VCR at first so I couldn’t step away. But it was during pledge drives, so I could go to the bathroom at those times.

I loved them all but Pertwee was always somebody special to me.

It would be weird but as long as the show wasn’t too Americanized it could work. I could picture Kevin Spacey being a bit of a devious Doctor Who. He’s done alien type parts before where you couldn’t tell if he was crazy or alien.. a weird cross between normal everyday person and “something’s not quite right about him”.

Pertwee was such a goof off out of role though. For me, Hartnell already passed on (I think), Troughton was “the Doctor as Troughton” and Tom Baker is “the Doctor *is* Tom Baker *is* the Doctor” and Peter Davidson was “All Creatures Great and Small goes to space and comes back as Peter Davidson”. Each of them remained the Doctor to me wherever they were.

But Pertwee was all sorts of people. He’s cut loose with unexpected humor and had a distinct personality from the Doctor. At first it was a bit of a shock to me seeing him in interviews. I remember thinking, “but.. but you’re supposed to be like [x] and [y]” and it was a good reminder that ‘yes, these are actors acting”. I respected him for that because it was one of those “adulting moments” as a kid and in that, Pertwee brought me to the next level, my own personal “Don’t cry Sarah Jane” moment. Loved that guy.

Just look at the TARDIS Official Cots®
You didn’t imagine all the different ways they could be used?
You *must* have a copy of the Official Time Lord Kama Sutra from The Talons of Weng-Chiang -

Eccleston looked like he’d been travelling alone for a LONG LONG time and was really sexually needy. He put all of his frustrations into dong an awful lot of running and being angry. It worked very well for the character and I was sad his run was so short.

I didn’t mind Moffatt to be honest, even with his strong starts and weak finishes because he did try to tie things together. Good fan service to tie together things from years apart from each other; not an easy task, and I admired his ability to continually shock the audience by introducing unexpected but not forbidden things into the official canon.

Yet his storylines were often very twisted and cerebral. Sometimes I liked it a lot, sometimes I was left scratching my head because I missed something.

The love stuff? Eh, they didn’t do a lot for me but considering his adoration for humanity the occasional fling didn’t seem *too* unreasonable, but honestly I was glad when Capaldi’s Doctor made a break from the sexuality. A lot of people hated Clara but I rather liked how Capaldi’s Doctor became obsessed, almost in a way that one might think an older man might get obsessed with a younger woman who is impossible to come together with, his mad obsession and devotion in the Confession Dial was brilliant and while many people didn’t like the followup where they FINALLY get to Gallifrey only for him to stop her heart, show her around and go to the ends of the Universe for her only to finally break his obsession with her (the hybrid), was very cerebral bit of work from Moffat.. yet perhaps a little too “high brow” for Doctor Who.

Maybe I just look for things to like in it. That time period of “no Doctor Who” was long stretch for me and I had to make do with other time travel shows, always wishing Doctor Who would come back and I’d be apologetic for not caring much for Colin Baker and Sylvester McCoy when they were on.

My 1st Doctor was Davidson and his was a very science-y Doctor, especially early on. I remember a number of episodes with puzzles in it, almost video-game like and they tried to teach a few things along the way.

Then Colin Baker came around. Took me a time to get accustomed to him and really, I never did. Then when it was McCoy they changed filming style to these LONG wide shots and low budgets and storylines I just couldn’t get my heart into. But I was in my mid-teens, a common age of hating all things that weren’t my childhood. The show seemed too “kiddy” to me but unfortunately I was the ONLY person I knew that liked Doctor Who, so I had no one to complain to. First other Doctor Who people I knew was when I got online in 1989 and found a few on the internet. It was eye opening to find out how many opinions we shared.