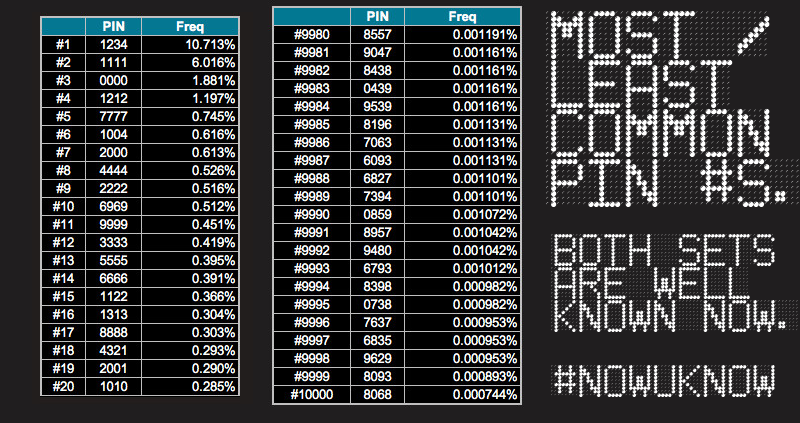 Most and least common PIN numbers.  Both sets are well known to those who do this kind of thing.
Don’t be evil.
But if you are using any of these PIN numbers, don’t. change them

And please, don’t try to hack someone else’s card with this information.

You’ll get it wrong, the machine will suck the card in and probably cancel it or something, and Mom or Dad will be really pissed at you because somehow, no matter how clever you think you may be, they’ll figure it out eventually.

Plus, once you’ve lost trust from someone else, it’s gone.

[back in the days of phone cards and phrack and public phones, I stole a phone card from a teacher to talk to some friends I met online [this is late 80s here].  The teacher lived in a different town, my school wasn’t even IN my hometown… well, I thought I was home free!.

But… I wasn’t.  I was smart but I was also cocky.  I learned: Never underestimate the intelligence of someone who is pissed off.
The movies lie.  People are smarter than they seem.  So 16 year old Kenny got lucky overall.   But, it was a good teacher and I lost her trust for the rest of the year.  Never realized how important trust was until it was gone.  No jail but still… sigh – it sucked.  I had to face her daily in class.  Worked my ass off too for my grades – she made sure of that.

So anyway, I present this to you so you can make your cards less hackable.  don’t be evil.  Ain’t worth it.

If you try evil on for size to see how it fits [that’s what I did – tried it on, like an ugly pair of socks], pick the evil of your choice carefully.  I only tried this once.  It was enough.  The evil ugly socks gave me a rash that lasted for the rest of the year.

_sorry for the lecture there.  I just wanted to present the information for security reasons… but I know temptation… although a back-in-my-day story is just that… a back-in-my-day story.  Totally ridiculous and has no application whatsoever in 2015. (or maybe it does, I dunno)  But I had to tell it.  Why?  Because I can.

And I realized: the fingers do a lot of moving, so it appears to be a difficult number with lots of finger-waving.

It means lots of people are equally clever with the exact same solution to the same problem, making them less clever than they could have ever imagined :P]

[Stole antiperspirant when I was in 7th Grade.  The guy running our youth group in my church pulled me aside and told me that I stink… in somewhat nicer words, but it was still a blow to my ego.

So, next day after school, stole antiperspirant because I was embarassed and, being a kid, I had no money.  Hated using it because I stole it.

Once it was used up, I confessed to my mother that I needed it.  She found the whole thing hysterical.  Just made it worse but at least I didn’t have to steal it again.  [I don’t think I told her I stole the first one until years later].

I never did repay back the store.  Then again, that supermarket chain went out of business years later.  I really should have repaid them back.

[then again, if it was that easy for me to steal that one time, I’m sure they got robbed blind by others who stole many times]

Still, that yuck feeling I got from stealing never left me, which kept me from stealing again… well, except for the phone card a few years later… but, well, I have no excuse for that one.  I just thought I was super-clever.  Learned that I wasn’t – which stopped me from doing that again]