Posted on March 12, 2015 by Kenneth Udut Leave a comment
You’d see a timelapse of me drawing it

I’m sure there’s a mathematical explanation that already exists somewhere.Unlike the “Traveling Salesman” problem, I cross lines freely because, realistically, you do cross lines, repeat work, go over the same spots a few times.  It’s the flaw of P=NP problems; they’re trying to do a tertiary search using binary true/false/law-of-excluded-middle.

All those $100,000 questions do is ignore the very source of the paradox: simply the “axiom/proof” model of mathematical truth.

Needs the / to be included… the lines crossed over.

But anyway, I’m sure there’s a mathematical way of expressing this as well.  This is my “subjective search” pattern I use when I can’t find my mother in the supermarket (she’s fast) or when I REALLY can’t find something in the house…  or when I want to accomplish a lot of tasks with the least amount of work.

Go as far as you can, cover as much territory as you can on your way back.

I can number them as well.  If I get a few free minutes later, I’ll do a timelapse though; it’s a GREAT idea; I’ll number them as well; maybe i’ll set it to some majestic sounding music so it sounds important; I like doing that.  Makes ppl think I’m smart

Thank you by the way – really – ’cause I will make that later and… maybe I’ll do some poking around the different search patterns that exist (or coverage algorythms) to find it.  I’m sure I’m not the first to find it.  I just know it works really well

But in either case, I love making little animations and short video things and especially when someone says, “I like what you did there.” and gets specific about why.  When you said,

“ive never seen a binary search diagramed in 2d like this before. id like to see it in timelapse”

I got all smiley-happy and immediately thought of a bunch of little projects I can do with *Kenneth Udut’s Search Pattern”.  Inspiration; I live for it 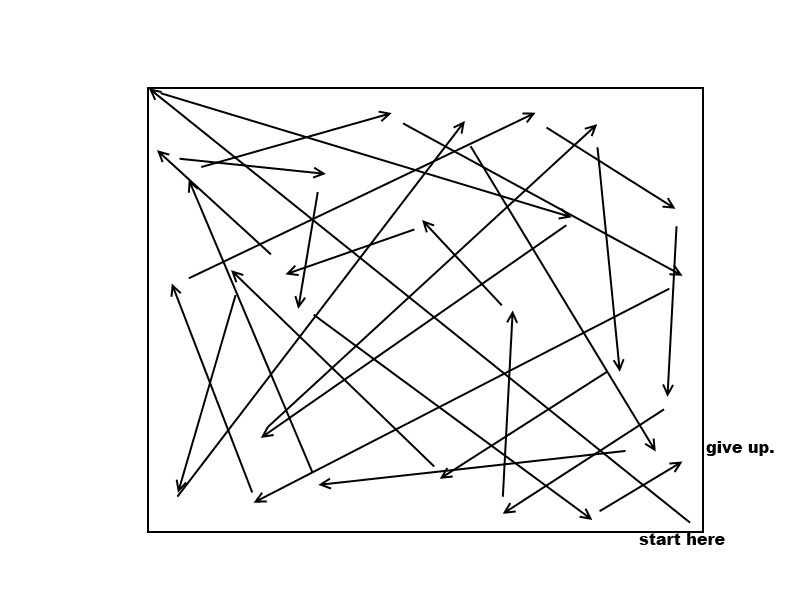