Posted on August 16, 2019 by Kenneth Udut Leave a comment

It’s his fuzzy relationship with Allan Grayson who is a fuzzy Democrat that got me reading all that.
Allan Grayson hired Matt Stoller for a bit and one thing they did is appeal heavily to the Koch side of the GOP to get bills to push through.
It’s a weird mix of privatization and public that has an uncanny valley to it so that’s why I have my skeptical flags up.
https://slate.com/news-and-politics/2013/07/florida-democrat-alan-grayson-is-the-most-effective-member-of-the-house.html
—-
Mind you, I’m in agreement with a lot of Stoller’s positions and his criticisms of Obama’s administration are demonstrative that Trump, Obama, Bush all back down the line are all neoliberal and he’s ardent on calling them out.
But I think it’s HOW he slips in and out of hats that leaves me a bit awkward.
=====
This is Matt Stoller’s definition of neoliberalism.
https://twitter.com/matthewstoller/status/841389028410814465?lang=en
I admire how he calls things out and maybe I was overly harsh above and misread. But Koch’s fight against Trump’s neoliberalism and Stoller’s fight against neoliberalism while coming from different angles (Stoller from a Roosevelt angle and Koch from a totally free market angle) do a Venn in the middle.
It’s uncanny valley so that’s why I stay cautious. 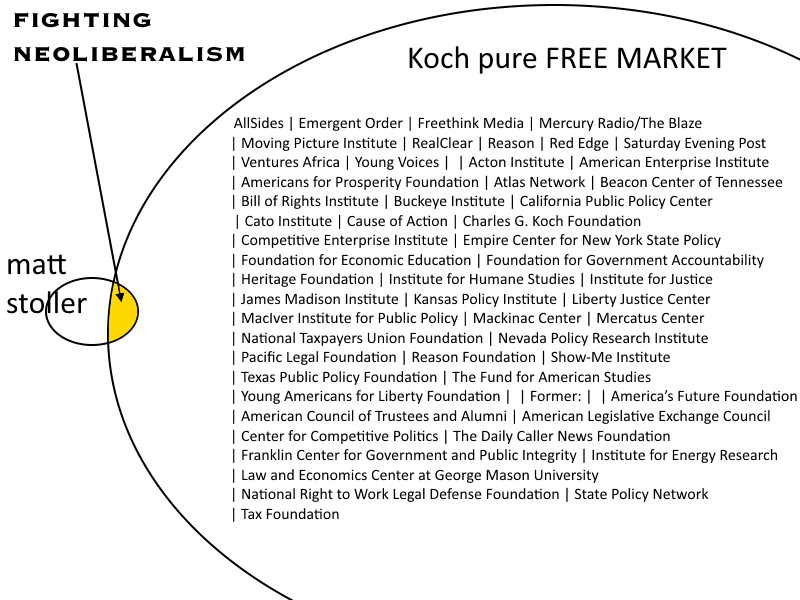 —–
Fair point – and I can’t say I’m entirely against it either to be honest.But I’ll give an analogy that shows why my note of caution:For years, i supported the notion of charter schools. Not for-profit but on a non-profit basis _so long as_ there was effective transparency.

I reasoned that even though it would also mean tax $$ would end up supporting some screwy religious schools, it would ALSO allow for Montessori, Democratic schools, Sudbury Valley – etc to flourish.

Rather than a hybrid charter/public system with non-profit accountable charters, the reality which I’m seeing in Florida in real time is for-profit peculiar brand of christianity charter schools supported by her wealthy foundations and her people getting inserted into MY LOCAL SCHOOL BOARD – all with a goal of dismantling public schools altogether and sucking out all of the funding into a few private hands. Absolute THEFT.

So, watch what you wish for. Strange bedfellows, yes but watch out who has the actual power.

——-
Actually locally, it started for my zone prior to Trump even running. 2014.Two founders of a charter academy got themselves inserted into our 5 member school board, in order to promote its interests. Mason Classical Academy.

Mason Classical Academy did a lot of lying in public relations.

But they could afford it. They were from Hillsdale College.Charter model. “The Barney Charter School Initiative”. It’s the Harvard of conservative Christian family-values folks with Devoss as wealthiest backers.

Now, after 5 years of public lying, an investigation and court battles, they’re off the school board, Hillsdale JUST cut ties with them and they’re going to have to MAYBE limp forward with HONESTY instead of fraud. Maybe.