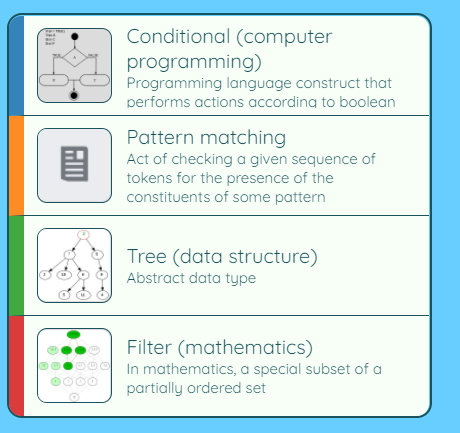 inbetweenness + scale.
you have conditionals like if/then/else, switch/select/case, pattern-matching…
then with less direct control you get filtering all of it, which leads to laminar flow which can break off into chaotic patterns which can fold together and…
…mix.. and when the chaos mixes you get…
gradients but which can also separate and clump into polar regions which becomes binary…
..from which one of the two can be eliminated leading to
elimination of inbetweenness + scale.
—
testing this thought out: ok, add tree structure inbetween pattern matching and filter.
So: Conditional
tree structure
filter
Now I think I can get from filter to laminar flow (or layering). Will try.
—

—————————
oh not yet.
Filter (mathematics)
Order Theory
Hierarchy
—-
Oh more than I thought:
Hierarchy
Causality
Time in Physics
Laminar Flow
-=—-
YES! intuition correct!
Laminar Flow can only go to Mixing (mathematics)
through Chaos Theory!
Laminar Flow
Chaos Theory.
Mixing (mathematics)
—-
I mean, you have choices but the further away you look, you no longer see choices but patterns and go out further the patterns disappear and you get gradients which can sharpen up into a binary and then finally a unary.
—
oh didn’t expect this. But it’s the only path. and it’s logical.
Mixing (mathematics)
Continuous function
Gradient
=====
I dunno. It’s not a fully fleshed out thought. Right now I’m attempting to see if there is a connection between IF/THEN/ELSE statements in a flowchart gathered massively in great bulk viewed from far away and if there’s a pathway to have it seem like a choice was already made.
===
There’s an image in my mind for it that I’m double-checking against SOME form out ‘out here’ thing.
===
Wow, harder than I thought. Once you enter the realm of continuous functions I guess getting back is tricky. Thankfully, there’s a lot of ways to express “2”. I was hoping for polar, polarity, polarization, binary, but they sent me on goose-chases.
But a simple transpose? Yeah, that works. It’s just flipping rows and columns — or approaching a thing from the side instead of the front to get a different answer. Now to see if binary relation will get me where I’m hoping to get.
Gradient
Transpose
Binary relation
===
ok I can get from Order theory to causality via directed acyclic graph – boxes and arrows… that’s better.
===
order theory
directed acyclic graph
causality
—————–
oh I can skip chaos theory and do Eddys instead.
Laminar Flow
Eddy ((fluid dynamics)
Color of water
Grey.
===
Ok, starting to match the zooming out I had in my head. The six degrees of wikipedia found pathways through some things I did not expect but that make sense, such as Tree (data structure) and Order theory – but Causality and Time in Physics was a treat because that’s exactly where time can enter.
Conditional (computer programming)
Pattern matching
Tree (data structure)
Filter (mathematics)
Order Theory
Directed acyclic graph
Causality
Time in Physics
Laminar Flow
Chaos Theory or Eddy (fluid dynamics)
Mixing (mathematics) (or fluid dynamics or Ergodicity)
Mixing (process engineering)
—
Well, the here in “out here” is my research lab – which is all of the internet which contains global brain basically.
it’s contrasted against whatever’s happening inside of my head.
You’re in “the here” on the other side of the glass along with Wikipedia and all of human knowledge that I have access to and are part of it.
—-
If you take the dentrites and keep walking backwards from them until all you see is vague flashing patterns as groups of them do their thing but only look like gradients – that’s the kind of thing I’m at.

I’m not sure what that means but one of the things I’m doing here is fighting my normal nature of zooming into the littlest parts and staying there and instead pulling away to see more broadly.
Very difficult for me as I probably should have figured this bit I’m working out years ago.
I’m still on questions, not making statements out of my questions just yet. or rather my statements are really questions, not statements.

For me a new thought is delicate, easily blows away . This whole connection thing is that. I don’t have any fancy words or conclusions about personality traits out of it just yet… I can barely finish this bit