Posted on January 15, 2021 by Kenneth Udut Leave a comment 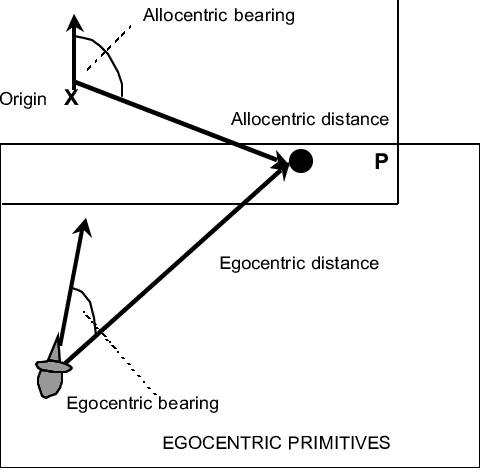 I’m a hard physicalist, which is why I’m working towards biological underpinnings of all this stuff, including subjectivity, narrative, the whole lot. There’s not ‘illusion’. It’s all physical, even the things we call illusion.

and no, i’m not a right/left brain person – BUT it is true that strokes affecting one side or the other have different effects which is what I am working with and from.

I am using a lot of shortcut language here that actually refer to papers I’ve been reading on this stuff — the distinctions between ego and allo centric for example were determined by selective loss of functionality among stroke patients that fall into very consistent patterns.

So what it is that I am describing is my attempts to comprehend the processes that afforded humans the capability to ascertain features of the Universe. Our role in this cannot be lifted up and removed.
Had we been electron sized, would our descriptions of the Universe been as we see them now? They would not. Had we been planet sized would we describe the universe as we do? We would not.
Beings with different sensory modalities would describe the universe differently. So while it is more difficult, I think it is necessary to include ourselves in the process.
====
Yeah, I was trying REALLY hard to compress an idea into a space that would allow for LARGE TEXT.
Looking into cognitive development, the egocentric coordinate system is first, the allocentric second. It’s the allocentric system that affords humans a “grid-like” view of reality, where there are objects that relate to one another where our presence is not required, even though we are there.
That we can divorce our descriptions of space from our own bodies allows us to describe how objects relate to one another.
Physics as it is without us.
====
Physics, mapmaking, etc _could_ be egocentric but it would look different I think.,
===
This was what inspired me:
“Alhough hemispatial neglect has been identified following left hemisphere damage (resulting in the neglect of the right side of space), it is most common after damage to the right hemisphere.[8] This disparity is thought to reflect the fact that the right hemisphere of the brain is specialized for spatial perception and memory, whereas the left hemisphere is specialized for language – there is redundant processing of the right visual fields by both hemispheres. Hence the right hemisphere is able to compensate for the loss of left hemisphere function, but not vice versa.[9] “
https://en.wikipedia.org/wiki/Hemispatial_neglect
===\
I’ll keep an eye out for that as I go.
I’m learning right now that in some sense, the allo vs egocentric coordinate view is seen by some as a competitor of the what/where hypothesis which is the predominant one.
I see them as compatible but it’s always enlightening to see where controversies are in fields because they tease apart each others arguments, sometimes factually and sometimes
===
Seems that more put the theories side-by-side as equally compatible and not as competition but some see it as a fight.

https://www.frontiersin.org/…/10…/fnhum.2015.00648/full Well, it gets interesting. and it’s a philosophically interesting question: do animals utilized an overhead map in the brain or not?
===
oh i like this paper’s way of thinking. I lean strongly towards rule-based and have for a while but i didn’t know it was a ‘thing’.
Rule based is more compatible with an embodied cognition view I think, even though it doesn’t say it: where it falls on the retina rather than having an internal overhead map of a space.
Still though, it’s hard to ignore the room-based experience. Pass through a door, it’s a new space in the brain like going from a dream to a dream.
I’ll have to see if this paper addresses that.
Like do blind people have an overhead map or do they count steps? [rule] that sort of thing. ‘

I certainly lack an automatic overhead map, which I attribute to a deficiency as I assume most people probably always have one – and yet I can easily find north/east/south/west without much thought. But that’s because I taught myself long ago to pay attention. That’s head situatedness I think rather than overhead map, although I can imagine an overhead map if I want to at times but only in a few situations.

====
Oh indeed. I’m still working through that. I had an idea the other day using the hexagons of grid cells for “spatial” sensation (volume) but while I didn’t get confirm/deny of that, I _did_ just find this just now:

Oh this points to egocentric definitely, at least in maze navigation. A change in maze layout makes for a change in direction of what they call gain-field in the parietal lobe. But I don’t know how they relate to grid and place cells

Oh! duh it’s all related to spatial memory and a old fashioned ENCYCLOPEDIA has everything easily available that I was struggling to find by jumping through papers.
https://www.britannica.com/science/spatial-memory
===
+10 points for an old school professionally curated reference. I forgot just how nice they can be, as much I enjoy the chase too.

oh it’s ok. I post as I go less as a “hey you need to see this Jack Sinclair” and more of a breadcrumb trail.

I consider it intellectual honesty on my part as it puts a time/date stamp (posting time) on when I discovered something and contextually situationed how (in this case, within a conversation with you)
=
oh! hippocampus 1971 – that’s when the allocentric / spatial map notion comes from.
—
but this Network model of allocentric function seems to indicate it may not be map-like but is instead built up. [that would mean the allocentric model is a “shorthand” for a coordinated set of function rather than etches mazes in the brain.
Final Note: Hippocampal Place Cells as an Example of Modular Coding of the Allocentric Representation?
Thus far, we have focused on behavioral, lesion, and fMRI studies, which argue against allocentric navigational strategies depending on a single brain region (Figure 3A) and as decomposable into contributions from individual brain regions (Figure 3B). One might argue, as others have (O’Keefe and Nadel, 1978; Redish, 1999), however, that place cells, present in the rodent, monkey, and human hippocampus (O’Keefe and Dostrovsky, 1971; Ekstrom et al., 2003; Hori et al., 2003), are the neural instantiation of an allocentric representation, or cognitive map. While place cells do have many features similar to what one might expect in a neural systems that code spatial environments in a map-like fashion, there are other important features of place cells that are decidedly not map-like. Place cells in the rodent and human hippocampus remap based on egocentric direction (Markus et al., 1995; Miller et al., 2013), are sensitive to goal and other temporal variables (Gothard et al., 2001; Hollup et al., 2001; Ekstrom et al., 2003; Bahar et al., 2011), and remap with subtle changes to the spatial geometry of the environment (Leutgeb et al., 2005; Wills et al., 2005). Indeed, recent theoretical models of the cognitive map now suggest that time and geometry less variant spatial coding mechanisms possibly resides outside of the hippocampus (Buzsaki, 2006; Buzsaki and Moser, 2013). Grid cells, neurons in enthorhinal cortex that fire in a regularly spaced fashion as the rat explores a spatial environment (Fyhn et al., 2004; Jacobs et al., 2013), may be a better candidate for the neural basis of allocentric representation (Buzsaki and Moser, 2013). Yet lesions of entorhinal cortex, at least in rodents, do not abolish place cell firing in the CA3 subfield of the hippocampus (Lu et al., 2013) and impair, but do not abolish, the place code in CA1 (Brun et al., 2008). While many details of entorhinal–hippocampal neural interactions remain to be established, grid cells do not contribute in a clear or modular fashion to place coding in the hippocampus, at least based on what the above-mentioned studies have determined so far in the rat. Furthermore, in addition to grid cells, entorhinal cortex cells also respond to egocentric direction (Sargolini et al., 2006), suggesting this area may not be specialized for allocentric computations alone. In addition, consistent with what we have argued here, it is clear that other areas, like prefrontal and retrosplenial cortex, also contribute critically, via oscillatory synchrony, to spatial coding in the hippocampus (Benchenane et al., 2010; Battaglia et al., 2011; Fujisawa and Buzsaki, 2011). Thus, although many aspects of the hippocampal neural code would appear sufficient to support an allocentric representation, the neural code itself is not map-like and depends, at least in part, on coordinated input and activity from other brain structures.
https://www.frontiersin.org/articles/10.3389/fnhum.2014.00803/full#h8
===
We played with rats and they made a unique squeak just for our game. Interspecies human/rat play and navigation.
https://edoc.hu-berlin.de/handle/18452/21514
===

There we go! Allocentric is ultimately translated (shifted) egocentric. Matches up with cognitive development timeline too.
What I need to investigate is how/when some people seem to adopt an almost wholly allocentric reference frame, either through brain lesion or by choice. I’ve seen plenty for having solely egocentric or losing allocentric.

It’s more logical this way too. Binary inclusion / exclusion, rather than working with arbitrary categories.

A rat wall set up in such a way that the rat is forced to make a direction decision because of a wall and two openings. Interpreting the implied 3D in line drawings and rats navigating mazes do seem to correlate.
“For example, Willats [1997] has carefully detailed the
ways that lines conjoin in T-shaped junctions to depict occlusion, Y-shaped junctions to show corners, and L-shaped junctions to show edges. “
===
Now that I have a better fix on allo vs ego centric reference frames for vision (you shift the ego to another home base), on to auditory system.
===
Egocentric vs Allocentric for auditory system. I’ll have to stare at this for a few minutes but I like it already.
Fig 1. Simulated receptive fields show that observer movement resolves coordinate frame ambiguity.
a-b: Simulated neurons with receptive fields tuned to sound location relative to the head (a, Egocentric) or in the world (b, Allocentric). Circles show hypothetical sound sources in a classical speaker ring; black lines indicate axes and origin of the simulated world. c: Schematic of world and head coordinate frames (CFs). d: Sound-evoked tuning curves according to allocentric and egocentric hypotheses when head and world coordinate frames were aligned. e-f: Predictions of allocentric and egocentric hypotheses showing mean spike probability averaged across uniform distributions of head rotation and position (e) and at specific head directions (f).
===
edit* over my head. I think I learned what I needed from visual and remain fascinated that they can be divorced from one another even though allocentric is a second order that is built upon egocentric (it seems)
—