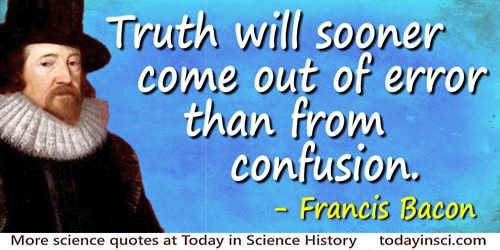 I’d like to give Bacon a few words, although Kuhn’s introduction of the concept of “paradigm shift” put Bacon on a long list of others. Still, there’s no question that Bacon was super influential, so he gets a few words.

I like the mindset shift that happens when you work on adopting a scientific mindset.

It’s not strictly scientific method or strictly reasoning but has bits of heart, bits of engineering, and loads of pragmatism.

I’m just finding correlations that are of a “related mindset” as yours (and mine as well I believe) that you might find interesting:

I agree. But some people do that. Play sports with it. I don’t think of them as opposing.

I can’t say that they’re idiots, as much as I want to because then *I’m* playing sports.

The people get make everything “polar opposite” will continue to do so as some always do. Sometimes useful things come out of their battles. Sometimes I join in when I think the fight gets unfair in one direction or the other. But as much as I want it to go away, it won’t, not yet.

I’m not saying my attitude is better than yours because I have no idea. I just have to what seems right for me to do.