Posted on March 6, 2019 by Kenneth Udut Leave a comment 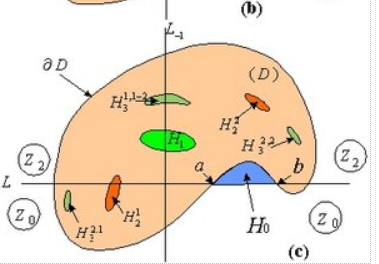 I don’t know, but glancing at her recent work with attractors it just dawned on me that geometrically concavity is likely due to an attractor or rather that “like finds like”.
It’s not from anything she wrote that I read but considering what it is that both gravity and rotational acceleration does – “dog chasing its tail”-like – is bring more of itself to itself.
why do like things tend to stay together?
—–
Ok. It’s a “skew product attractor”. I knew I wasn’t nuts. You’ll like this: I found a 1951 reference (prior to major study in dynamical systems and attractors) involving a torus.https://projecteuclid.org/euclid.ojm/1200687628
=====
Noninvertible maps

——
The flaw I see is in considering these as closed systems. But it’s amazing how far you can get by putting what are basically geometric primitives as basins of attraction and saddles
http://www.ams.org/journals/proc/2015-143-02/S0002-9939-2014-12271-4/home.html
=======
Good question. They’re on a map, so probably isolated but I honestly don’t know.
======
I swap between paradigms way too much but that’s ’cause I’m never satisfied with any of them.
=====
” To get from groupoids to categories, we need to also allow things which were previously invertible to be noninvertible, i.e. perform “directification.” We could also do this first starting from a set, obtaining a poset (in which the symmetric relation “is equal to” has been replaced by the non-symmetric one “is less than or equal to”). Then when we homotopify a poset, we get a category: while one element xx of a poset may precede an element yy, there may be many different morphisms from one object xx of a category to an object yy.”
====
As I see Time (or change, or entropy) as one of those ‘things’ that automatically compels everything to be directed, thus goes equalities, loops, perfect platonic forms, etc.
They make good approximations but if your nice loop finds itself forward in time and in a different space than when it began, it’s a spiral – EVEN THOUGH, subjectively (from the POV of the stepping algorithm, or even equation of 2+2=4, it’s all nicely contained.
=======
1) 2
2) +
3) 2 UH OH UNEXPECTED COSMIC RAY
4) =
5) 3.8
======