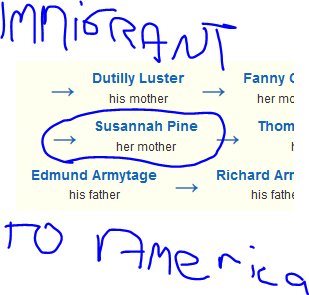 I can’t believe how well this is working!
I’m breaking “all the rules” of DNA and genealogy research.
But maybe it’s because what I’m looking for is something different — and having a single well-connected “branch”.
a) DNA “relative finder” shows I have a far off cousin whose mother’s side is from the “H16b” family group.
Now, I’m NOT in the H16b family group, whatever it is.
But because I’m related to this cousin, I’m ALSO RELATED TO at least ONE ancestor from their “Mom and Dad” in some way.
That’s big. Most Mom + Dad DNA mixes freely throughout the body. That area they get the “magic codes” (“H16b” in this case) is tiny… SUPER tiny.
All the rest is just as important, at least for genealogy research.
So I need to know something about that cousin’s mom or dad right? Name, where they live, etc right?
WRONG. Just the magic code. H16b.
So:
b) I look on an grouping of a BUNCH of “H16b” folks.
c) I click on ANY RANDOM “H16b”. It doesn’t matter who it is.
d) Usually within a click or two, JACKPOT, I found a cousin!
e) From my connection to THAT cousin, I can find out:
1) Which immigrant brought that mtDNA to America.
2) Who is our common ancestor?
—
I feel as if this shouldn’t work.
I’m using my really basic “Make a triangle as BIG AS YOU CAN” rule.
It’s basic. But it’s working at finding cousins linked together by THEIR common ancestor (H16b) and linked to ME by a a few dozen millimeters of DNA cotton AND automatically finding ancient ancestors that we ALL THREE HAVE IN COMMON.
Four, if you include the USA colonial immigrant.
It’s intelligent guessing. Random but not random. It’s NOT telling me a lot of things. But it *is* telling me that ANY answers regarding H16b – ANYWHERE I FIND H16b with anybody on the planet — will be found:
a) within that big wide and tall triangle containing No-idea-how-many-millions of people through the centuries
OR
b) ANCESTORS of that ancestor I found.
Triangle turns into an arrow pointing up.
==== 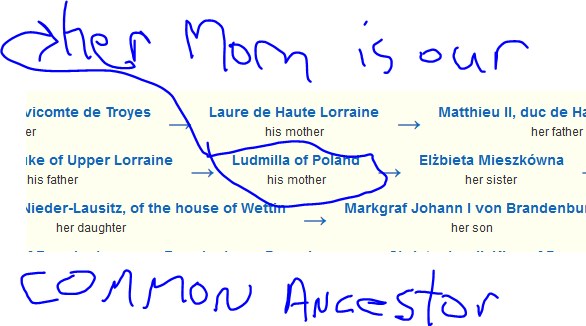 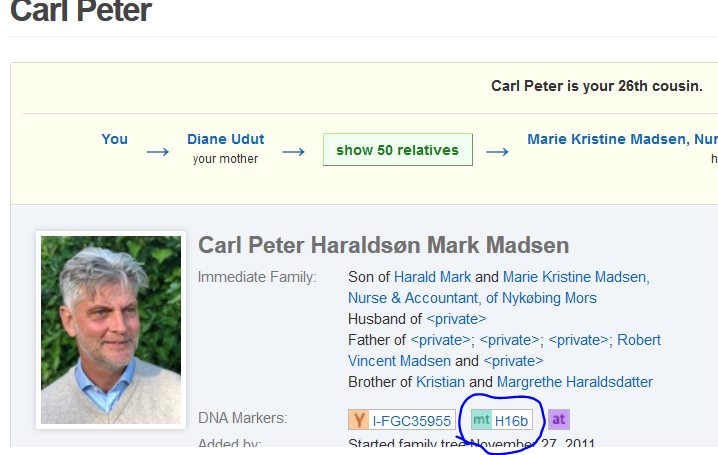 Oh wow. I looked at a far off cousin of his which brought me traceably further back in time. It’s zooming into a fractal.