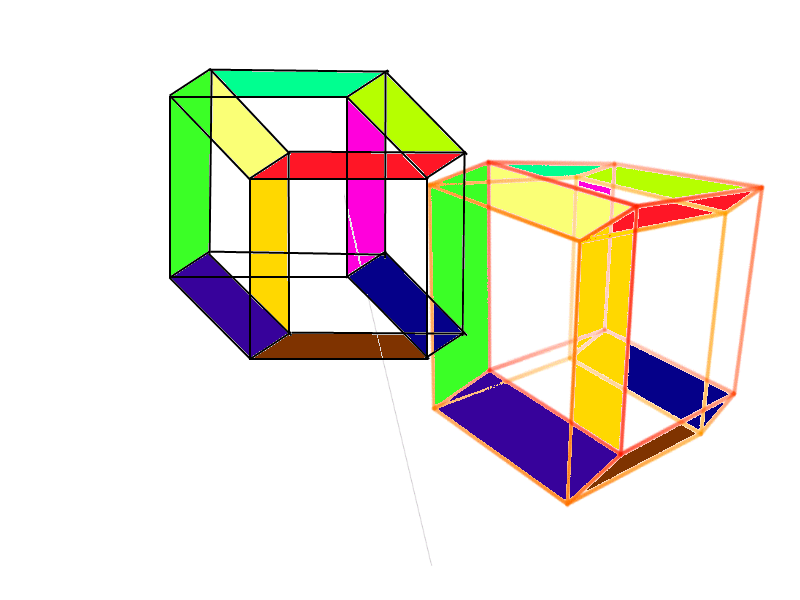 Hypercube confirmed. Used: http://ift.tt/2u640lw and rotated until I found it. Then I colored in matching pairs of sides.

Mine is on the left, the rotation I found is on the right. Good. a 34 year old uncertainty of mine (is it a hypercube I’ve been doodling or isn’t it?) is confirmed.
Uploaded by Kenneth Udut 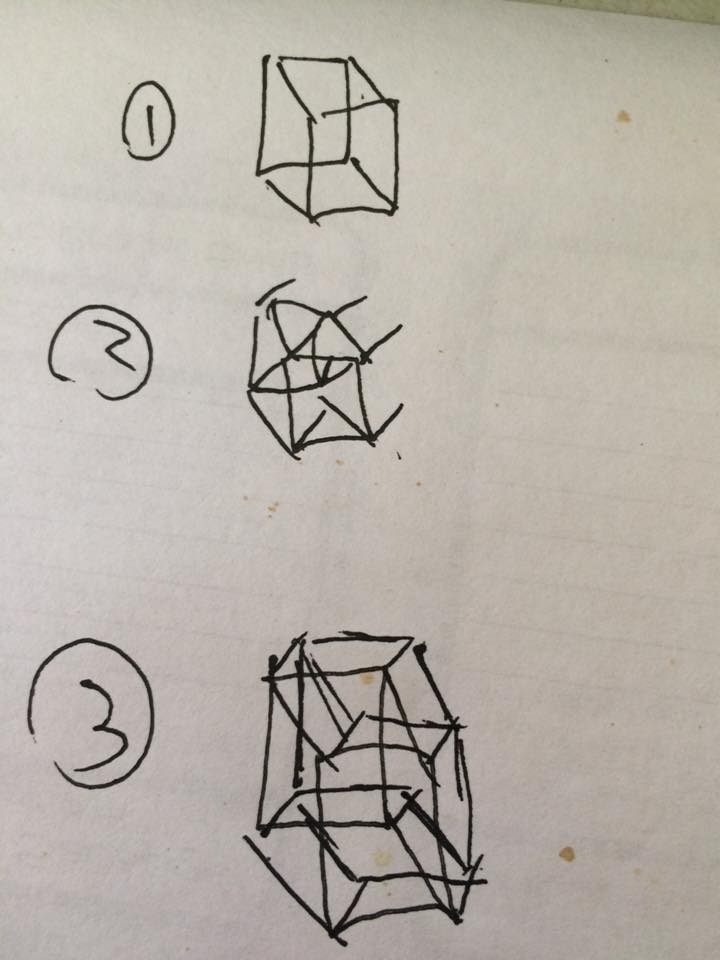 I’d do it like this.. just a little neater but not much neater. [this is a quick sketch I did for Jes earlier]. I don’t know when the nagging doubt that “this might not really be a hypercube” came from.. but probably from seeing other projections *except* this one for a long time.

I think that’s why I started to doubt it through the years. I’d been doing this doodle forever: I’d do it like a trick in 7th grade. “Hey guys, watch this!”, draw the cube, “oh big deal a cube”, then do the other thing and get “woah, that’s impossible! how’d you do that?” stuff.

I don’t know where I got this from – probably just extended the lines the other way. But I never saw this projection until I could recreate it on http://hypersolid.milosz.ca/ — and it feels good to be absolutely sur

Yeah I never liked the cube-in-a-cube, unless it was rotating where it looked like it was swallowing itself up. Then it was cool. Otherwise it just looked silly.

I almost got myself oversaturated with them through the years in a way because I’ve seen so many, rotated it in my mind so many times along with other shapes… and yet… not really oversaturated because I still like it.

I think there’s one projection where it looks like you’re going down a long tunnel and it’s all moving around you. All fun stuff.

Doctor Who as a kid inspired a lot of my science stuff. My first dodecahedron was in an episode of Doctor Who. Don’t remember much about the episode, just they they said it a lot and it later on inspired an on and off again fascination with shapes and packing.

I like the ones that fail in higher dimensions

One of my favorite 2D shapes is heptagon as it doesn’t play nicely by the rules.

What scares me is that I understood most of what you said. I feel like I shouldn’t because I can get really hooked on this stuff and try not to get sucked in too deeply.. [as I can start getting all mystical and woo about it all and I try to avoid that

What helps me in visualizations (this is a poor example of one), is I mentally remove the outer edges of the shapes and focus on the inertial moments and turn them into stick machines. Then my mind has no problem processing the rotations, although it’s sort of like seeing an animation of a Rue Goldberg machine and understanding all of it at once… but not impossible.

Basically, each face becomes a separate pivot point n the machine, hooked into the center of the 2D faces. I make the connections, remove the faces and the edges.