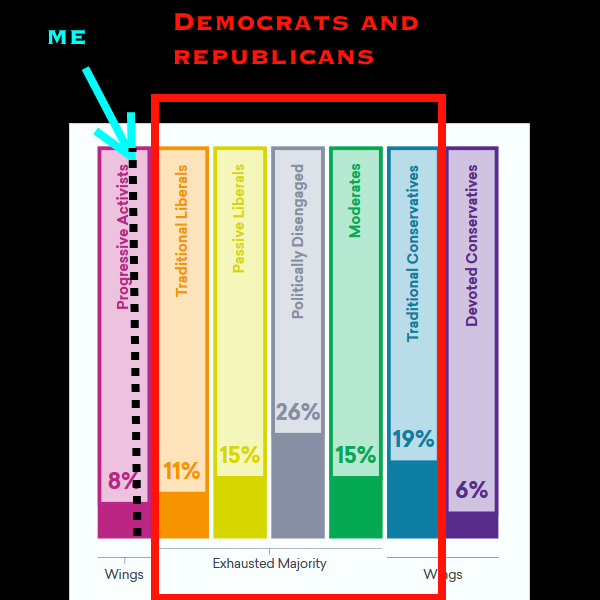 Hampshire College was a good fit for me as it was just a tiny bit “too far” in the direction I already was in.

So I learned how far left I went and where it stopped for me. Of course, at that time and up until 2014, I was CERTAIN that I’m just “perfectly in the political center” – that **I** had the rational point of view and it was everybody else that’s nuts, except for a select few who ‘get’ my POV.

But I think thanks to early exposure to “This is further than I go in the direction I’m in”, I learned quickly where a side of my boundary is.

So I got to be “mini-right” within that progressive world, a constant nudge to those within my “group” yet never actually leaving it.

Through the years, I’d also formed ties with people from across the political tribes so as to try to understand.

I still don’t feel part of “my tribe” but now I can acknowledge that I have a tribe and am within it, even if I’m a bit of a nudge to those a little more left and right within it.

It helped me grasp why I never ‘fit’ with either party and by subdividing within Progressive Activist, why I could relate to many folks further right (which is most Americans) while still saying, “But you have to tolerate the intolerant” to fellow “tribe members” – but meaning it from within this tribe’s mentality, for OF COURSE any signs of legal intolerance should be fought hard, but on an interpersonal level, allow leeway of opinion so as not to become as fixed as those you fight against for being fixed.

“Open but not so open brains fall out” kind of thing.