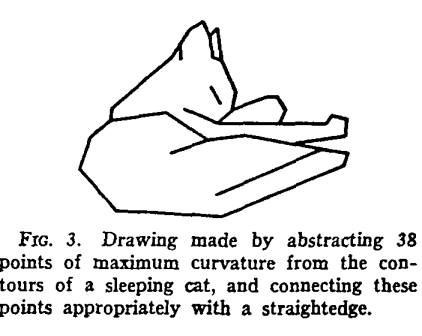 FLATTENING THE CURVE.
Shannon information theory.
This is from 1954 but I found it today:
SOME INFORMATIONAL ASPECTS OF VISUAL PERCEPTION, FRED ATTNEAVE

In short, the curves are redundant information.

The top is from an academic paper in 1954 and the faces are ones I did about a month ago. I was tracing faces but I used only straight lines as I’m trying to figure out what’s the “minimal information” necessary to understand an image.

Common  objects  may  be  represented
with  great  economy,  and  fairly  striking
fidelity,  by  copying  the points  at  which
their  contours  change  direction  maxi-
mally, and  then  connecting  these points
appropriately  with  a straightedge.

—
DATA COMPRESSION WORKS BECAUSE Redundancy, and Redundancy is GOOD GESTALT because it reduces UNCERTAINTY. I never thought of that.

“The good gestalt  is  a  figure  with  some  high
degree  of  internal  redundancy.  That
the  grouping  laws  of  similarity,  good
continuation,  and  common  fate  all  refer
to  conditions  which  reduce  uncertainty”