Posted on December 13, 2015 by Kenneth Udut Leave a comment 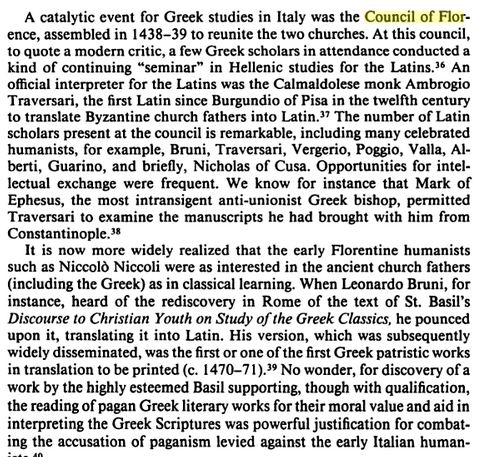 I’ve been curious about the re-introduction of knowledge from Byzantium into Italy and Europe for a long time now, although not enough to seek it out. But it was nice to trip over this reference: The Council of Florence, massive failure as it was of its primary intentions (to reunite the Western Church with the Eastern Churches… and… only a few Eastern Churches attended, preventing it from ever becoming an official Council), nevertheless introduced Byzantine Scholars to the West.

The efforts of the Latin Church and the several Eastern Churches that were in attendance that brought some of the best-of-the-best over from Byzantium to the conference.

Mark of Ephesus, Sainted in the Eastern Church for his effort at rejecting the Latin Doctrine of Purgatory and refusing to sign the added clause and rejecting the singular Pope of Rome as authority over all the Churches, East and West, also deserves credit for bringing the Byzantine scholars over to teach the Latins, who enthusiastically began translating the “lost Greek works” into Latin, particularly now well known humanists like Bruni and Niccoli, especially the works of the Greek Church Fathers as well as the works of the ancient Greek Philosophers.

Had it not been for this accommodation and, perhaps foresight (for the Fall of Constantinople / Establishment of the “back to to the book” fundamentalist Islamic regime under sultan Mehmed II at the age of 21 was to happen but a couple of years later), the history of Europe and my own USA would have been a much different tale indeed.

[[also I welcome corrections to what I wrote above by ppl who know more about this stuff than me. I’m just piecing together the history as I understand it and of course, bias is unavoidable as are mistakes, but I try to minimize them]]

Constantinople and the West: Essays on the Late Byzantine (Palaeologan) By Deno John Geanakoplos