Posted on January 4, 2017 by Kenneth Udut Leave a comment

You can go right to Socrates

But yeah, there’s things you can do to curtail it somewhat. I didn’t *think* I was being a smartass to my mom, as I was using rational, clever arguments to justify my thoughts/feelings about things.

But her perspective? I was being a smartass.

Indeed. Heck, one weird trick works great and it’s used by all parents of all well behaved children in every country all over the world across all of time

A nicer way of saying “passive-aggressive” is “assertive”.

It’s part of a scale between passive and aggressive, with assertive (or passive-aggressive) in the middle.

I read this book way back in 1990 and they’ve updated it again a couple of years ago. It has cartoon panels of ‘model’ and ‘not-model’ behavior for parents to consider.

It’s all cartoon stereotypes but familiar conversations between every parent/child.

I *think* it’s related to non-aggressive communication… I forget exactly what it’s called.

But it works. I use it on kids, adults, everybody.

There’s other techniques than this one out there that are equally good (or even better) but this is one that I know.

no prob. Honestly I don’t think you need it. I didn’t need it either – I just liked it. I can just think of a lot of parents that I *wish* had read this book instead of hitting their kids or screaming at them constantly, wondering why they were ineffective.

I’ve lost my temper with my nieces and nephews through the years a few times. But it was more ‘me’ than it was ‘them’. Thankfully, I can count on one hand how many times I used my hand and it was an automatic swat that I instantly regretted.

I just learned it too

I always thought it was bad and never knew where it came from ’til I looked it up for you. I think it gets a bad rap because it seems to be dishonest. but that might be “passive-aggression gone wrong”

You nailed it. That’s precisely how I approach people of any age.

Negiation is sales. I don’t mind someone selling me something *if* they do it right.

But if they do it wrong, they’ll have a hard time.

This chart helps too. You can see that passive-aggressive is a strange, wonky combination of elements from the passive + aggressive column: Gives the outward *appearance* of passive while the aggressive (true nature) comes out in confusing ways. 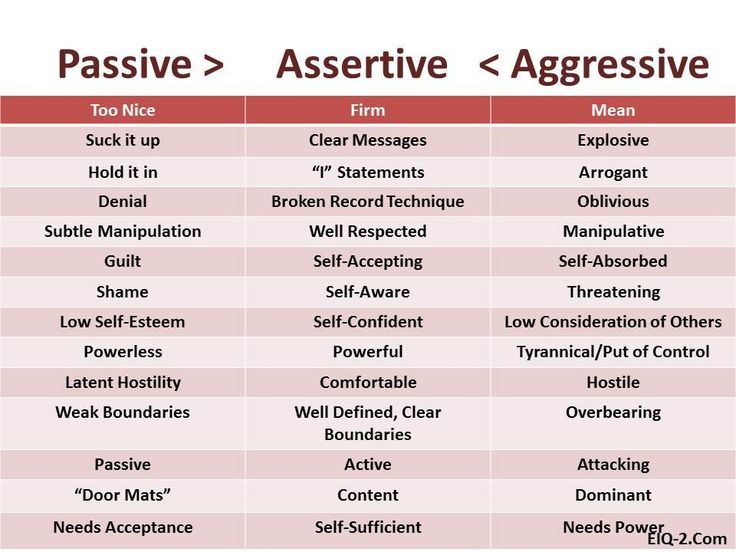