Posted on September 29, 2015 by Kenneth Udut Leave a comment 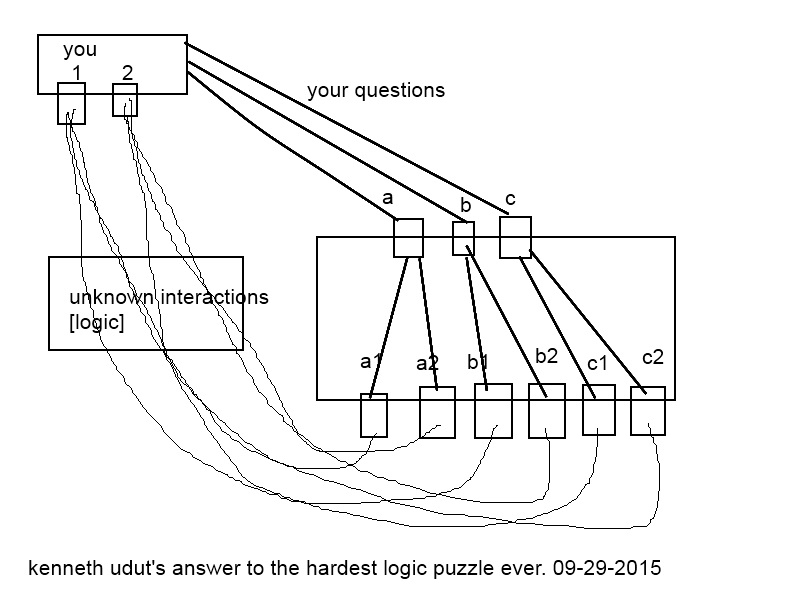 Ok, maybe if I break it down I can try. Let’s see…First thing I have to do is know what I have to keep track of.A database might work as follows:INDEX NUMBERTIME/DATE OF EVENTQUESTION-TEXTQUESTION-DIRECTED-AT [T/F/R]ANSWER RECEIVED [DA/JA]PRIOR-QUESTION-REFERENCE-NUMBER [0 for none or prior question referenced].That would be a start.

Then, I would extract some data.I want to know all the cases forT for F and for R separately and line them upMy first goal is to attempt to understand their language.I would have such things as:T-JAT-DAF-JAF-DAR-JAR-DAThere are SIX distinct words in my mind at this point. They have no need to correspond to each other in any way at this point.I do not know their meanings, but i need to keep track of them all seaprately. They mean true/false but they could also mean ANYTHING.For me, they could just as easily mean:Apples, Oranges, Dirt, Computers, Water, Fingernail.

But then, things get tricky.I have to treat each of those separate 6 words as being able to PASS MESSAGES to each other. One changes the state of the other.So, I have to learn the rules by noticing the patterns.Does it appear that a T-JA changes the F-DA in some cases for example?The answers influence each other in some way. The way the answers influence each other is very important and isn’t easy to figure out.Also, in retrospect, I labelled the names wrong. I should not have used T-JA, F-JA, R-JA because I DON’T KNOW who is who.So the T, F, R distinctions are currently meaningless.I would have to go back and change the labels in my program to reflect my own agnosticism about their identities to:A-JAA-DAB-JAB-DAC-JAC-DAto avoid future contamination.

Now this is where I would be stuck.If I could go TWICE (if not more times), I could do the following:a) find some sample questions. I don’t know what they are. I have to be sure to cover every possible combination of question asking/answering between the Gods as well as as long-chains of questions I can ask.I might have to have an arbitrary stopping point. Maybe the longest chain of questions would be 12 in a row to the same god.It would be arbitrary. I don’t know enough so I have to pick something.thenb) I’d go back to my computer and input the sample values into the system.From there, I could begin to find some potential patterns. It wouldn’t be enough to have the final answers, but what it would do is this:c) Start generating questions that can further hone in on any patterns I notice in the interactions between the gods’ answers with each other, and with my questions. I will also line up their question chains on top of each other to see:a’s 12 chained questionsb’s 12 chained questionsc’s 12 chained questionsI’d see what the relationships are (if any) batween the fingernails and the apples as it were.Now, the reason WHY I abstract AWAY FROM the “true/false/random is this:I don’t need to know such things yet. They’re just words that have the potential to influence each other.It doesn’t matter if the word is “true” or “orange”. I just know they have effects.It also helps remove my cognitive bias of needing to “FIND OUT THE TRUTH”. All this “True/False/Random” stuff will just confuse my brain. I need to simply have items on the table that do things to each other.

What I basically designed was this:A system for addressing three unknown entities by asking them questions who respond in an unknown language each consisting of two words each.The user can ask as many questions as they like.The answers of the three unknown entities also can interact with each other in some way.It’s a meta system that can be used for Logic puzzles, word games, any kind of interaction with these three entities – and they can be ANY three entities, not just true/false/random entities.

So, oddly enough, Deepak Krishnan, my answer to the Hardest Logic Puzzle Ever is this:Take the Logic, the Hardest and the Puzzle out of it completely.

What’s nice is it doesn’t have to be A B C, T, F, R.You could use it to address any three unknown inputs which have two unknown outputs to help ascertain the nature of the inputs and the nature of the outputs.

That would be for the client to put the gods, the questions and the logic systems in place.All I could do is put a building in with all open doors. I’d let the client decide how the flow of traffic through the building would go.Wish I could go further but I’m just the plumber. Other people will have to turn on sinks and flush toilets in whatever manner and patterns they wish smile emoticon